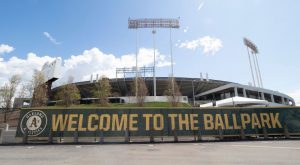 The Warriors and Raiders are already out of Oakland, could the Athletics be next? ESPN reports the MLB franchise could put pressure on local government officials to receive a new stadium or they could move on.

“The future success of the A’s depends on a new ballpark,” A’s owner John Fisher said in a statement. “Oakland is a great baseball town, and we will continue to pursue our waterfront ballpark project. We will also follow MLB’s direction to explore other markets.”

The A’s have been in Oakland since 1968, but are looking to replace their home. If a new stadium is approved it would not be ready until 2027.

“We’re hopeful that our really exciting plan for a waterfront ballpark that’s privately financed will be taken up by the city council,” A’s president Dave Kaval told The Associated Press on Tuesday. “I think it’s something that is kind of a once-a-generational opportunity to reimagine the waterfront. We’re going to continue to pursue that and we’re still hopeful that that could get approved, but we have to be realistic about where we are with the timelines.”

“We share MLB’s sense of urgency and their continued preference for Oakland. Today’s statement makes clear that the only viable path to keeping the A’s rooted in Oakland is a ballpark on the waterfront,” Mayor Libby Schaaf said in a statement Tuesday.

The post SOURCE SPORTS: Oakland A’s Looking at Options for Relocation appeared first on The Source.