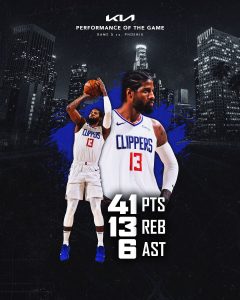 Paul George may be the most criticized NBA superstar on the planet. Last night, Paul George answered the call.

PG13 took his final seat on the bench of the Los Angeles Clippers with just over a minute remaining in the victory of the season-saving win against the Phoenix Suns.

Paul George put in 41 points, 13 rebounds, and six assists on 15 of 20 shooting, powering the effort of taking the Clippers back to Los Angeles for a Game 6.

In the postgame, George acknowledged that he is called out more than other stars in the NBA.

“They can judge me on what they want to. That part don’t matter to me. I’m going to go out there and hoop and give it everything I got.”

Before Game 5, Clippers coach Ty Lue expressed how he was hopeful about coming back from a 3-1 deficit.

Game 6 is on Wednesday.