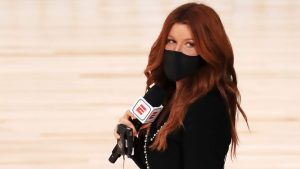 Rachel Nichols was scheduled to be the sideline reporter for the NBA Finals, but after all that transpired this week, ESPN decided to make a switch. ESPN announced on Tuesday that Malika Andrews will replace Nichols as the sideline reporter during the NBA Finals between the Milwaukee Bucks and Phoenix Suns. Nichols will continue to host “The Jump.”

Nichols reportedly criticized ESPN last year for choosing Maria Taylor to report on the sidelines of the NBA Finals over her.

“If you need to give her more things to do because you’re feeling pressure about your crappy longtime record on diversity — which, by the way, I myself know personally — like, go for it, just find it somewhere else,” the recording said, according to The New York Times.

Nichols apologized on Monday’s edition of “The Jump,” a show she co-hosts on ESPN.  The network said Nichols will still host “The Jump” during the NBA Finals.