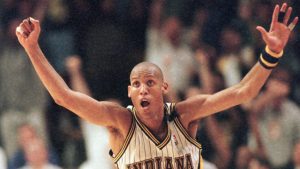 Reggie Miller spent his entire NBA career with the Indiana Pacers and it appears he never taught about playing for another team.

Miller was one of three former stars interviewed by ESPN’s Nick Friedell for a story on Steph Curry, who has spent his entire career with the Warriors. The other former players interviewed for the story were Dirk Nowitzki (Mavericks) and Jerry West (Lakers) who spent their entire careers with one team.

In the interview, Friedell asked the men whether they would have considered playing elsewhere or if they were recruited by another star. Miller had a great response.

“No. And if Michael Jordan ever would have called me and tried to sway me to come to Chicago, I would have told him to go f— himself! ‘I’ll be coming to see you on I-65 or whatever that highway is there. I’ll be down to see you,’” Miller told Friedell. “I never came close to going anywhere else.”

Miller is from an era in which team hoping wasn’t the normal thing to do as it is now of days. Right before Miller retired in 2012, the Miami Heat tried to recruit Miller to join the Heaties that included LeBron James, Dwayne Wade, and Chris Bosh. Miller respectfully declined that offer and retired instead.

The post SOURCE SPORTS: Reggie Miller Gives Cleaver Hot Take On If He Would’ve Joined a Super Team appeared first on The Source.