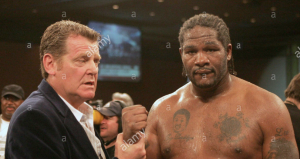 According to Bowe, he still has it in him..

With a a salt and pepper grey beard and all, heavyweight boxing champion Riddick Bowe announced his return to boxing via Instagram after signing a contract with Celebrity Boxing.

Bowe mentioned a few possible contenders, namely Mike Tyson and Evander Holyfield, however, he let it be known that he’s ready and willing to jump in the ring with the top dogs from his era.

The post SOURCE SPORTS: Riddick Bowe Announces His Return To Boxing At 53 Years Old appeared first on The Source.