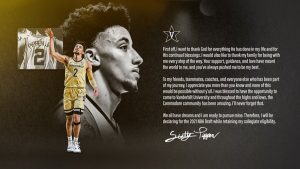 Scottie Pippen’s son is looking to follow in his dad’s footsteps. Vanderbilt guard Scotty Pippen Jr., the son of Scottie Pippen, announced Saturday that he is entering the NBA Draft. He will, however, retain his college eligibility for the time being. That’s because he doesn’t have an agent.

Pippen Jr.had a breakout season for Vanderbilt last season. He averaged 20.8 points, 4.9 assists, and 1.8 steals per game, and led the team in all three categories. While these numbers are impressive, heading into the season, Pippen Jr. wasn’t ranked in the ESPN top 100 draft prospects. With that being said Pippen Jr could return to Vanderbilt.

Pippen Jr. loses nothing by declaring. It’s possible he expects he won’t get drafted but declared in order to get feedback from NBA teams. That could give Pippen some things to work on for next season.