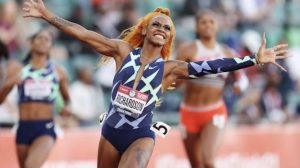 Sha’Carri Richardson broke her silence after failing a drug test and getting suspended from the U.S. Olympic team.

The 21-year-old was already a fan-favorite after running the women’s 100-meter race last month at the U.S. Olympic Track and Field Trials in Eugene, Oregon in 10.86 seconds.

Richardson tested positive for THC, which she takes full responsibility for.

“I want to take responsibility for my actions,” she said in an interview Friday on TODAY. “I know what I did. I know what I’m supposed to do, (what) I’m allowed not to do and I still made that decision.”

“Don’t judge me because I am human,” she added later

Sha’Carri Richardson shared that the loss of her biological mother is the reason she failed the drug test but didn’t beg for sympathy.

“My family has kept me grounded. This year has been crazy for me, going from just last week losing my biological mother, and I’m still here,” she said after the Olympic trials.

Do you think she should still be allowed to participate in the 2021 Olympics in Tokyo?

The post SOURCE SPORTS: Sha’Carri Richardson Speaks Out After Failing Drug Test: ‘Don’t Judge Me Because I Am Human’ appeared first on The Source.