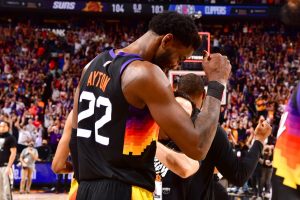 The Phoenix Suns beat the Los Angeles Clippers 104-103 in Game 2 of the Western Conference finals on Tuesday on a buzzer-beating alley-oop.

The Suns were down 103-102 and had the ball under the basket with 0.9 seconds left. Phoenix used a sweet inbounds play to throw a pass from Jae Crowder to Deandre Ayton for an alley-oop.

“I’ll start off by saying that’s definitely Jae [Crowder’s] game-winner, making a great pass for a 7-footer,” Ayton said after his dunk with 0.7 seconds left lifted his final line to 24 points on 12-for-15 shooting and 14 rebounds.

What makes this win even sweeter for the upstart Suns is the fact they lead the Western Conference Finals 2-0 without their veteran point guard Chris Paul, who is in COVID-19 protocol but expected to play in game 3.

For the Clippers, this is the third straight playoff series that they find themselves in a 2-0 hole. What makes this one really hurt is the fact that Paul George missed two free throws with 8.2 seconds left. If he makes either one, the Suns would need a different play to win the game.

The post SOURCE SPORTS: Suns Stuns Clippers On a Buzz Beater Alley to Take a 2-0 Series Lead appeared first on The Source.