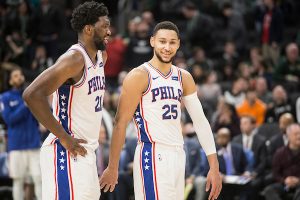 Ben Simmons disappeared in the playoffs for the Sixers, but that doesn’t mean other teams aren’t interested in trading for him. Darren Wolfson of SKOR North reported this week that the Minnesota Timberwolves “badly” want to trade for the Philadelphia 76ers star.

“I texted with someone that knows Ben Simmons incredibly well that has working knowledge of all things NBA. My text the other day said … ‘how badly do the Wolves want to trade for Ben Simmons?’ This individual sent me a text back. It was one word: ‘Badly.’ Make no mistake: The Wolves have trade interest in Ben Simmons.”

The Timberwolves could use a pass-first point guard like Simmons. The Timberwolves had three starters this season (Karl-Anthony Towns, D’Angelo Russell, and Malik Beasley) connect on over 38 percent of their three-point attempts. That is the type of spacing that they would need to accommodate Simmons, who could also transform the Timberwolves on the defensive side of the ball.

If the Timberwolves can come up with a package that doesn’t includes Towns and this season’s rookie of the year runner-up in Anthony Edwards, they could see themselves back in the playoff hunt in the loaded Western Conference.