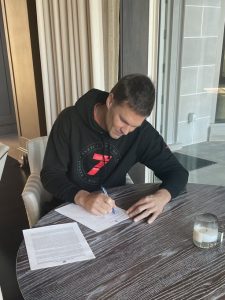 Fresh off another Super Bowl victory, Tom Brady has reworked his contract to include a one-year extension. This moves all but means, Brady plans to play in the NFL for at least two more seasons.

The original two-year, $50 million contract Brady signed with the Bucs last offseason was set to expire a year from now, but the two sides have officially agreed to an extension. According to multiple reports, Brady has signed a four-year extension with Tampa Bay that voids a one-year extension. The deal frees up $19 million in salary-cap space for 2021 and essentially locks Brady in with the Bucs through 2022.

After the Super Bowl, the Buccaneers head coach Bruce Arians promise to run it back, Brady restructuring his deal, makes bringing back key players to run it back that much easier.

Father time is undefeated but at 44, Brady isn’t backing down for that fight.