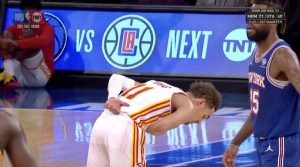 The New York Knicks are at home and after a masterful five-game performance, Trae Young took a bow at the center of Madison Square Garden.

The bow came after the Madison Square Garden faithful gave a standing ovation to their Knicks, accepting their defeat. As the fans stood and applaud, Young pulled a 30 foot three pointer to silence them.

“I know where we are. I know it’s a bunch of shows around this city,” Young said to ESPN the Hawks’ 103-89 victory. “And I know what they do when the show is over.”

Young added, “Like I said since the beginning of the season, I feel like I’ve worked my whole life for this moment, to play in the playoffs on the biggest stage. I put in a lot of work. A lot of the guys who have been here have done the same. It feels good to win it. It feels good to win the series. Now, we get to focus on the second round.”

The Atlanta Hawks will now move on to face Joel Embiid, Ben Simmons, and the Philadelphia 76ers.

The post SOURCE SPORTS: Trae Young Bows the Knicks Out the Playoffs appeared first on The Source.