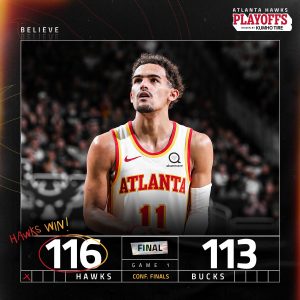 The Milwaukee Bucks found out the hard way how deadly Trae Young is in game one of the Eastern Conference Finals. In the Hawks’ 116-113 series-opening win over the Bucks on Wednesday night, Young scored a playoff career-high 48 points and dished out 11 assists.

Young’s previous playoff career-high was 39 points against Philadelphia in Game 5 on the road last round. Naturally, he had to one-up that in Milwaukee. The Bucks didn’t provide much resistance in the first half, as Young hit 11 of his first 16 field goal attempts.

The Bucks came into this series as the heavy favorites and rightly so. Giannis Antetokounmpo and Jrue Holiday combined for 67 points. Young reminded people after the game that the Hawks are talented and have weapons of their own.

This is the third straight series that the Hawks have grabbed game one. At some point, the underdog tag needs to be removed. Game 2 is on Friday night back in Milwaukee.