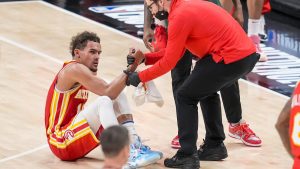 The Milwaukee Bucks took a 2-1 Eastern Conference finals series lead over the Atlanta Hawks but not without some drama. Hawks’ Trae Young got hurt on a fluke play.

Late in the third quarter of the game, Young was breaking to go back on defense. As he stepped back, his right ankle landed on referee Sean Wright’s foot. Young twisted his right ankle in the process and had to head to the locker room.

Trainers taped up his ankle and ruled the injury as a sprain. Young returned the game with 8:44 remaining in the fourth quarter, but only attempted one more three pointer for the rest of the game.

Hawks coach Nate McMillan spoke about Young’s injury after the game: “I don’t know right now. I think, when he returned to the floor, he was obviously limping on that, and when I subbed him, we decided just keep him out.”

With the Hawks down in the series already, losing Young for any stretch of time could really hamper any chances of the upstart team reaching the NBA Finals.