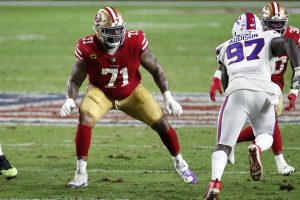 Trent Williams and the San Francisco 49ers have agreed to a six-year, $138 million deal that has made him the highest-paid offensive lineman in NFL history, ESPN reports.

The deal has $55.1 million in guaranteed money and a $30.1 million signing bonus. The deal passes the $92 million extensions that David Bakhtiari received from the Green Bay Packers this past November.

Williams discussed deals with the Kansas City Chiefs and Chicago Bears before resigning with the Niners. Williams was acquired by the 49ers on the third day of the 2020 NFL draft.

The deal follows an extension for fullback Kyle Juszczyk that will keep him with the Niners through 2025.

“Kyle is a unique football player whose versatility, leadership and skillset are a tremendous fit with us,” said General Manager John Lynch. “He has been integral to the success of our offense the last four seasons and his contributions on the field are just a portion of the value he brings to our team. Kyle has helped to establish a standard for our team on the field, in the locker room and in the community. We couldn’t be prouder to reward him with this well-deserved contract extension. Welcome back Juice!”