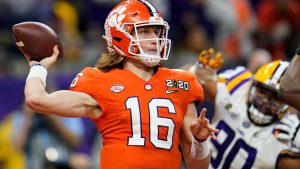 The presumptive No. 1 pick of the 2021 NFL Draft Trevor Lawerence has already made a big splash in the world of cryptocurrency.

Lawrence has signed a multi-year endorsement deal with the cryptocurrency investment app Blockfolio. The terms of the first-of-its-kind deal haven’t been disclosed, but he did receive a signing bonus that was paid out entirely in crypto and deposited into his Blockfolio account.

Blockfolio competes with apps like Coinbase and is trying to reach a younger client base by partnering with Lawrence. FTX, Blockfolio’s parent company, paid $135 million in early April to secure the naming rights to the Miami Heat’s arena for the next 20 years.

Lawrence is looking to cash in on cryptocurrency early in the game and literally early into his rookie NFL season.

Lawrence also has endorsement deals with Gatorade and, reportedly, Adidas, who are presumably paying him cash.