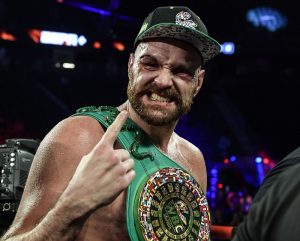 Some boxing purist fans believe the addition of Logan and Jake Paul to the sport has been bad for business. Not the heavyweight champion Tyson Fury. Speaking with TMZ, Fury reveals that they are good for the sport.

“I’ve been pretty impressed with the Pauls — both of them — to be fair, they’ve been a good breath of fresh air to the boxing scene,” Fury explained. “I think Tommy knocks him out cold. I think [Jake’s] a decent fighter for sure. But, I know Tommy’s a dynamite puncher.”

Tommy is Tyson’s brother and if he is anything like the champ, he packs a punch. You will soon be able to catch Fury in the ring for a third time with Deontay Wilder, as they are scheduled for their blow off fight on July 24.

The post SOURCE SPORTS: Tyson Fury is a Fan of Jake and Logan Paul’s Involvement in Boxing appeared first on The Source.