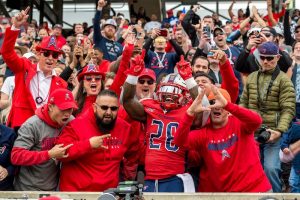 The XFL is returning soon and with that return, the league is looking to partner with another league in another country. According to Michael McCarthy of Front Office Sports, the XFL and CFL “Canadian Football League” are in negotiations to create some sort of partnership.

That agreement could result in a postseason game between the XFL champion and CFL champion. Another option being considered is an All-Star game featuring top players from both leagues. There is even some thought of the two leagues playing some “interleague” games during their respective seasons.

The ultimate goal of the partnership is said to be a merger between the two leagues. This would ideally expand the CFL’s reach further into the United States while making XFL teams viable in Canada.

A rebranded XFL and a partnership with the CFL could do wonders for both leagues. With the XFL on the sidelines for 2021 and possibly 2022, there’s a lot of new eyes on the CFL product this year.

The post SOURCE SPORTS: XFL And CFL Considering Partnering Up In 2022 appeared first on The Source.