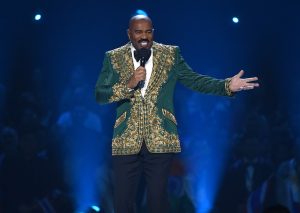 One thing about Steve Harvey, he stays with a hosting gig and he is set to be the first-ever Verzuz host.

Earth, Wind, and Fire and The Isley Brothers are facing off on Easter Sunday, April 4, and Harvey will host the virtual event.

“@IAmSteveHarvey will be hosting #VERZUZ, this Sunday with The Isley Brothers and Earth, Wind & Fire!,” Verzuz announced on Instagram and Twitter on Tuesday.

There’s a whole lineup following the Easter Verzuz including a 4/20 How High special with Method Man and Redman. The ladies are in for a special treat on Monday because SWV and Xscape will be going head-to-head.

“Everybody’s been asking about it. We were ready,” Xscape singer LaTocha Scott said. “We’re never [backing] down from a battle. It’s great for the culture.”

“At first, we were thinking of doing a girl group vs. a guy group, like Jodeci. But SWV just stood out,” she continued. “People love their vocals, and they love ours, too.”

The post Steve Harvey is Set to Host Earth, Wind, and Fire and The Isley Brothers Verzuz Celebration appeared first on The Source.