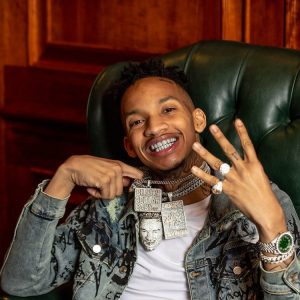 He’s the voice behind tracks like Animal, Do Dat, Go Stupid, and more. Stunna 4 Vegas, signed under DaBaby’s Billion Dollar Entertainment label, has been arrested this weekend in Fayetteville, North Carolina. The rapper recorded the entire encounter on Instagram live until officers put him in the back of their vehicle.

“What you resisting me for?” Stunna asked the officer.

“I’m not resisting you for anything,” the officer responded..

“What you putting handcuffs on me for?” Stunna asked, still trying to figure out his reason for arrest.  “He’s so mad I tip my nieces and nephews. You better stop grabbing me like that! Them folks ain’t paying you enough to got-damn be doing all that.”

“You’re under arrest for driving with a suspended license – I just told you right now so you can shut up!” the officer answered before adding that the rapper also ran a stop sign.

“He’s a clown! Damn, I hate clowns!” Stunna says while being walked away from his phone lying on the ground.

As of right now, there hasn’t been an update on Stunna’s release. Check out the whole ordeal below.

The post Stunna 4 Vegas Arrested While on IG Live appeared first on The Source.