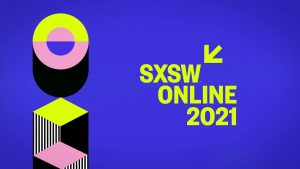 Almost a year ago, the iconic South by Southwest (SXSW) festival was the first major festival to announce its cancellation in light of the global pandemic. This year the festival picked back up, but in a very different format than years past. Similar to the Sundance Film Festival, SXSW is almost entirely virtual this year, streaming content across five channels (the online platform, mobile app, and Connected TV app) every day between 10am–10pm CT with live video content rebroadcast 12 hours after the initial showing.

Even though they may not be live performances with normal audiences, the festival will also be hosting performances by several established hip-hop artists as well as emerging ones including both American and International artists with a heavy emphasis on Texas-based artists. The event’s musical showcases are scheduled between 2:30pm–10pm CT. A full schedule can be found by clicking here and then filtering by Music Genre. Select showcases will be available on-demand starting Sunday, March 21.

The event will also broadcast live keynote speeches, presentations, and interactive discussions. The focus of most of them will center around the arts, technology, and social justice causes.

The film portion of the festival is headlined by the highly-anticipated documentary, Demi Lovato: Dancing with the Devil, which is billed as “a powerful YouTube Originals documentary event, exploring every aspect that led to Demi Lovato’s nearly fatal overdose in 2018, and her awakenings in the aftermath.” In the documentary section, Kid Candidate tells the story of Hayden Pedigo, a 24-year old experimental musician, and his unlikely run for Amarillo city council after his Harmony Korine-inspired spoof campaign video went viral. One other documentary that has drawn a fair amount of interest is United States vs. Reality Winner, which tells the story of a former government worker, Reality Winner, who disclosed a document about Russian election interference to the media and became the number one leak target of the Trump administration. A full lineup can be found here.

While the festival’s content plans to address some fairly heavy topics, the comedy portion of the festival will showcase comedians performing sets at some of the world’s (mostly empty) iconic venues. A full schedule can be found here.

For those with virtual reality capabilities, the SXSW Online XR world will feature condensed, fantastical artist representations and will showcase live sessions, meet-ups, special events, a selection of 360° videos from the Virtual Cinema program, and 2D video feeds of SXSW programming. (PC, PCVR, or Oculus Quest tech is required.)

While some of the content requires a purchased pass, much of it is free. While the best way to view many of the films is obviously on a desktop, the app is also very accessible. It can be downloaded from the App and Google Play stores.

The post SXSW Kicks off Virtual Online Festival appeared first on The Source.