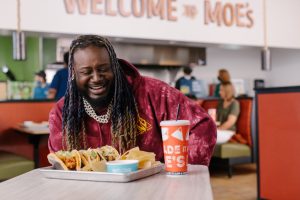 This collab combines Frank’s RedHot and the famous liquid gold queso from Moe’s and is wrapped with a hard shell taco and soft tortilla with buffalo in between.

Customers can customize the protein of their choice with a variety of toppings for $6.99.

T-Pain and Moe’s Southwest Grill collaboration comes after the Tallahassee crooner became a trending topic after he revealed that he spiraled into a four year depression after Usher told him he ruined music.

In a clip from Netflix’s This Is Pop, the “Buy You a Drank” singer explained that he was en route to the BET Awards and a flight attendant woke him up to say the “Burn” singer wanted to have a word with him.

“Usher was my friend,” T-Pain said. “I really respect Usher. And he said, ‘I’m gonna tell you something, man. You kinda fucked up music.’”

T-Pain thought he was joking at first until Usher added, “‘Yeah man you really fucked up music for real singers.’ I was like, ‘What did I do? I came out and I used Auto-Tune.’ He was like, ‘Yeah, you fucked it up.’ I’m like, ‘But I used it, I didn’t tell everybody else to start using it.’”

The conversation came years after JAY-Z publicly slammed autotune and called for the “death” of it on his Blueprint 3 single, “D.O.A.” But T-Pain says that “very moment that started a four-year depression for me.”