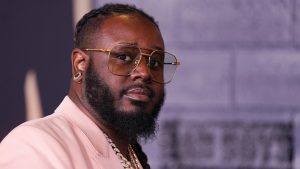 T-Pain reveals that a surprise 2013 conversation with Usher on a plane led him down a four-year depression.

In a clip from Netflix’s This Is Pop, the “Buy You a Drank” singer explained that he was en route to the BET Awards and a flight attendant woke him up to say the “Burn” singer wanted to have a word with him.

“Usher was my friend,” T-Pain said. “I really respect Usher. And he said, ‘I’m gonna tell you something, man. You kinda fucked up music.’”

The Tallahassee native thought he was joking at first until Usher added, “‘Yeah man you really fucked up music for real singers.’ I was like, ‘What did I do? I came out and I used Auto-Tune.’ He was like, ‘Yeah, you fucked it up.’ I’m like, ‘But I used it, I didn’t tell everybody else to start using it.’”

The conversation came years after JAY-Z publicly slammed autotune and called for the “death” of it on his Blueprint 3 single, “D.O.A.” But T-Pain says that “very moment that started a four-year depression for me.”

The post T-Pain Reveals He Was Depressed For Four Years After Usher Told Him He ‘F*cked Up Music’ appeared first on The Source.