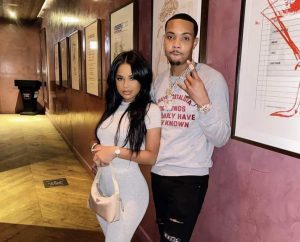 While Taina Williams is preparing for the arrival of her newborn, she seems to have also taken the time to address some rumors that have been circulating on the innanets for quite some time now.

Hollywood Unlocked captioned a video of G Herbo and his girlfriend talking to each other while on Instagram live, where the Chicago native seemed to spill some tea.

“#GHerbo had diarrhea of the mouth on his live today! He not only suggested that he & #TainaWilliams were talking while he was with #AriFletcher, but also revealed his unborn’s gender. Hopefully, his 23 gifts to Taina made up for it!” Hollywood Unlocked captioned the snippet of the live, referring to the 23 things he wrote his fiance that he loved about her for her birthday.

“Lies lies & lies,” Taina wrote under the post. “I’m sick of y’all trying to make me look bad and coming up with yall own timelines,” she penned in a post and delete.

“You gon lose em the SAME WAY you got em,” another penned.

Fans in the comments seem to be suspicious of the accuracy of Taina’s claims considering that the couple began dating 2 years ago, considering the fact that the Chicago superstar’s son is 2 years old as well.

Is G Herbo spilling too much tea?

The post Taina Williams Denies Dating G Herbo While He Was with Ari Fletcher appeared first on The Source.