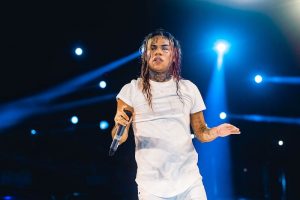 If anyone is going to troll, it’s going to be Tekashi 6ix9ine. The New York rapper is back at it again following a conversation with Young Thug, Gillie Da Kid, and Wallo on the Million Dollaz Worth of Game podcast. During the sit-down, Young Thug revealed that he and a friend of his made a “friendly $5000” bet on if Tekashi 6ix9ine would snitch or not following his arrest in 2018. In addition to the bet, Young Thug and his friend also bet that something would happen to the rapper upon his release.

Shortly after the video surfaced the innanet, the rainbow-haired rapper posted a picture of Young Thug with the caption, “THESE THE REAL N*GGAS IN ATLANTA. 2021 SLATTT.” Check out the picture of Thugga posted below.