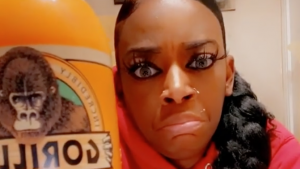 Tessica Brown became a viral sensation after she posted a video of herself under emotional distress because she couldn’t remove gorilla glue from her hair.

Brown visited a surgeon to successfully remove the adhesive with her hair still in tact and has since sued the company.

On the other hand, Gorilla Glue Girl drew inspiration from her sticky situation and launched her own hair care line called Forever Hold.

All the products are available on the company’s website and will wash out safely without medical intervention.

Would you buy hair care from Tessica Brown?

Months after the hair fiasco, Brown showed off her healthy curls. “Hair! It’s the hair for me,” she said in an Instagram video.

Gorilla Glue Girl is banking off her notoriety with her new hair care line, and she recently got a shout out from Nicki Minaj on her latest musical effort called “Fractions.”

“Head game slicker than little miss Gorilla Glue,” the emcee spit on the re-released version of her critically-acclaimed Beam Me Up Scotty mixtape.

She’s normally “offended if someone calls her Gorilla Glue Girl instead of her name, but Nicki gets a pass,” TMZ reported. “She says even though Nicki didn’t reach out in advance to brief her about the shout-out, she hopes to meet her in person one day.”