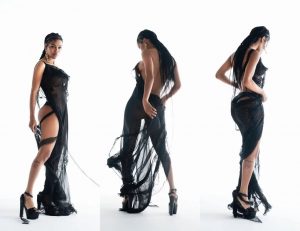 Teyana Taylor has once again made history, becoming the first Black woman named the “Sexiest Woman Alive” for Maxim Magazine.

Teyana Taylor has the cover of Maxim, which she shared on Instagram and celebrated the achivement. “Somebody pinch me!!!!” Taylor wrote. “Maxim Hot 100 to be named the ‘Sexiest Woman alive’ by literally living in the skin I’m in.”

“As a entrepreneur, wife, a busy mother of two & working behind the lens in my director bag I tend to hide behind my sweats & vintage tees. So I as you can see I don’t have much time to be and feel sexy. This particular day was dope because it made me see another side of myself. I had just dropped JUNIE off at school before heading straight to the shoot; sweatpants a beanie and an army jacket. My hair wasn’t done for a ‘shoot’ because I planned on throwing on a wig & I didn’t have on any make up.”

According to Hot New Hip Hop, the shoot photographer Gilles Bensimon wanted to do the shoot without altering her look at all.

You can get a glimpse of the new magazine here.

The post Teyana Taylor is the First Black Woman Named “Sexiest Woman Alive” by Maxim appeared first on The Source.