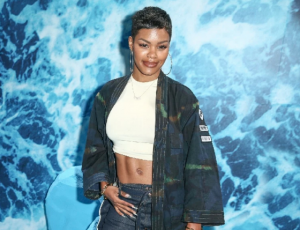 Fans of Teyana Taylor were disappointed to hear back in December that she had decided to retire from music just a few months after releasing her critically acclaimed third studio album, The Album. Despite the album garnering critical acclaim, something happened behind the scenes that made Taylor want to bow out from music, for the time being maybe.

Teyana recently sat down with Cam Newton on his Sip ‘N Smoke series where the two talked about her career and how issues with her label made her want to retire from music.

“At the end of the day, I’m a mom first,” said Taylor. “A mom, a wife, a woman. And I think for me, I put in a lot of work. I work very, very hard. So, if you feel unheard and unseen—like how I said earlier with my husband. He sees me, he hears me. I take that sh*t serious. Everything that I do. So if you’re my husband, or I’m signed, everybody that I’m aligned with should see me. They should hear me. They should feel me. If you don’t see me, hear me, or feel me, it’s a dub for you.”

She went on to say “And I felt like the label wasn’t really hearing me and seeing me. I felt underappreciated. So, for my mental health, my mental well-being, for my kids, let me just put this on ice for a little [bit].” She then revealed that her retirement is not permanent, but that she just didn’t want to produce under her former label anymore. “It’s not that I retired permanently, it’s more like, I just don’t feel like I want to move another inch for a company.”

You can watch the full interview below.

The post Teyana Taylor Says She Decided to Retire After Feeling “Under-Appreciated” By Label appeared first on The Source.