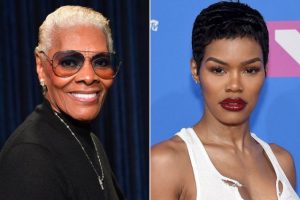 Last December, Shadow And Act reported that iconic singer Dionne Warwick preferred that singer, actress and multi-hyphenate star Teyana Taylor portray her in a biopic series.  The two stars are often noted for their resemblance to one another.

In an interview with Buzzfeed, Taylor gave an update on the biopic series.  “We’re literally at the stages of getting everything laid out. One thing we’re very clear on is that we definitely want it to be a series,” she said. “Dionne has been an icon for so many decades — not years, but decades! Her story is still continuing, so we knew an hour-and-a-half movie wasn’t gonna do it. Ninety minutes ain’t enough girl, you need a whole series!”

Taylor also gave insight into her experience spending time with Warwick. “It’s dope that I actually get to spend time with her, because when you’re portraying someone’s life, getting that opportunity can be rare,” she said. ” Sometimes things aren’t approved or other times the person isn’t physically here to say what they want, so to know that she’s gonna be a part of this for the whole ride is absolutely amazing. We will be telling her story from her own words, and I’m so excited. Dionne and her son have literally been so lovely.”

Last February, Warwick sat down with Entertainment Weekly and gave a sneak peak that her life story would be turned into a cinematic series.

“It’s going to be a series, we’re planning to do an episodic type of a show. [Teyana] is certainly a talented young lady with whom I’ve had the pleasure of interfacing,” she said. “In fact, we had a conversation last night on the telephone. She’s very excited about the prospect of being involved and she’s also going to be very, very much involved in directing it and putting together parts and parcel of how we see this going.”