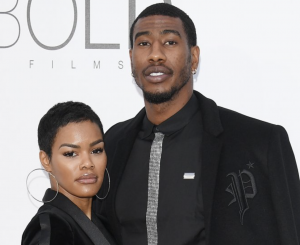 The Shumpert’s are coming to a screen near you soon! In a report posted on Thursday, May 13, E! announced that 5 new shows are coming to the network. In the list of reality series set to hit the scene was We Got Love Iman & Teyana. According the network, the show will take viewers on an unfiltered behind-the-scenes look at their lives juggling music, fashion, business and family.

This isn’t the couples first time around the reality TV block. Back in 2018, the love birds had a reality series with VH1, which seems similar to their new E! series. The description of their former series was

“This power couple shares an unconventional romance defined by an unbreakable bond. As they take on the music, sports and fashion worlds, the success in their careers is only rivaled by their passions for each other and their daughter Junie.”

Unfortunately, their VH1 series was over after 1 season. Either way, we’re excited to get an inside look at life with the Shumpert’s. We can’t get enough of their baby girl Junie and their newest edition, baby Rue Rose.

The post Teyanna Taylor and Iman Shumpert To Star in New Reality Show appeared first on The Source.