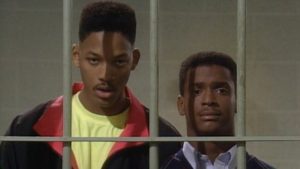 If you think back to The Fresh Prince of Bel-Air, or just stream it on HBO Max, there was usually a relatable social commentary message built into the script. Sometimes it was worked into the wardrobe while other times it was more on the nose. One of those moments is where Will and Carlton, played by Alfonso Ribeiro were racially profiled by some good ol’ boys cops as they hit the road to Palm Springs. Carlton being Carlton, with his upper-class mentality and privilege, where he often forgot he was still a brother, naively but rightfully so believed the police would help the duo with directions. Will’s Philadelphia inner-city street smarts advise his cousin, the traffic stop may take a wrong turn, real fast, no pun intended.

“Listen to me, Carlton, when he comes up keep your hands on the wheel,” Will advised during the stop. Carlton ignores the warning and attempts to cordially greet the officer. The officer ignores the handshake attempt and orders Carlton to keep his hands on the wheel, where he can see them. Eventually, the pair are jailed on car theft charges before Aunt Viv and Uncle Phil, set those cops straight.

Ribeiro, while on a recent episode of The Kelly Clarkson Show, details the episode.  “The storylines always seemed to work because they came from real places. They came from real experiences that we all had to deal with, right?”

“The idea that Carlton was just like, ‘He pulled us over because we were speeding. It’s not because we were Black. He treated us this way because he understood right and wrong.’ That’s all he knew,” said Ribiero. “And so you could touch on these subjects without really being preachy and really say, ‘This is how it is.’”

“In every aspect of life there are mirrors, and we are a mirror to every aspect of society, so what was wonderful was being able to say and to show those stories and to have those real conversations. And a lot of those conversations happened on set as we were getting ready to film it,” he added.

The post ‘The Fresh Prince’s Alfonso Ribeiro On Memorable Scene About Racial Profiling appeared first on The Source.