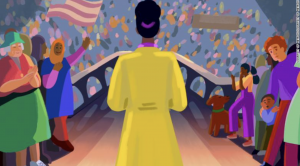 A new animated Tv series known as ‘We The People” is set to air on netflix this year. Now, fans can get a first look at it in the newly released trailer. According to CNN, this music-filled show was created by Chris Nee, and along with the Obamas, was executive produced by Tonia Davis, Priya Swaminathan and Kenya Barris.

This educational show will feature a series of 10 music videos that cover a range of civics lessons tailored toward young people. Some artists included in the series are H.E.R., Janelle Monáe, Cordae, KYLE, Andra Day and poet Amanda Gorman.

“We The People. Michelle and I are excited to share our latest show from Higher Ground: We The People. Some of our favorite artists got together with amazing animators to remix civics—and the result is a lot better than what we had in school. Check it out on @Netflix this July 4.” wrote former President Obama.

Michelle also shared her excitement of the upcoming project.

“We The People. I can’t wait for you all to see We The People! This Higher Ground project is filled with the songs and the heart of so many of our favorite artists—but even more, it’s a rallying cry for a rising generation that’s ready to take on the world. Watch it on @Netflix on July 4!” wrote the former First Lady.

The series is set to premiere June 24th at the American film institute and the discovery channel festival.

The post The Obamas are teaming up with Chris Nee For A New Educational TV Series appeared first on The Source.