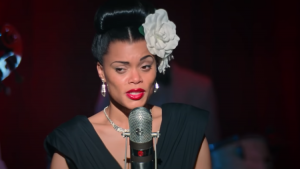 History-making Golden Globe winner Andra Day, who took home Best Actress for her critically acclaimed role in The United States vs. Billie Holiday almost left Hollywood after wrapping the film. Day has emerged as a star and is receiving Oscar buzz but that hasn’t stopped her from considering quitting the business.

Day went through a rigid and almost detrimental method acting transformation to slip into Holiday’s mindset. The dangerous regimen to become Bille Holiday, including smoking, drinking, and dropping a whopping 39 pounds. These unfamiliar vices and physical demands made her really think about how much she wanted to be an actress once her role was wrapped.

“I thought I was gonna retire after this movie from acting because I thought, ‘This shit is too deep.’ I’ve always loved actors and always had respect for them, but now I have a whole new respect for them and how deep they have to go,” she said to Variety’s Awards Circuit podcast. “If I had to do something like this again: not eating, not sleeping, just drinking and smoking, I don’t know if I could survive that shit.”

Nevertheless, Day’s performance impressed, to say the least and was directed by Lee Daniels from a script by Suzan-Lori Parks. Day’s transformation into Billie Holiday rose above a film that garnered an array of opinions as she revealed a career-defining portrayal of the tragic story of Billie Holiday.

You can watch The United States Vs. Billie Holiday on Hulu.