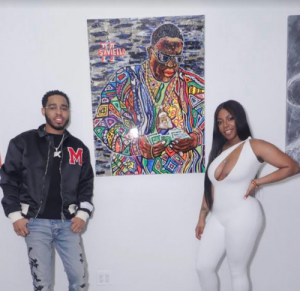 The music was jumping…the vibe was flowing and the artwork was glowing as fans celebrated the legacy of Rock-N-Roll Hall of Fame Rapper, Christopher Wallace aka The Notorious B.I.G. The 4th Annual “THINK B.I.G. ART SHOW” was held March 6th & 7th 2021, in the heart of Bedford Stuyvesant, Brooklyn, New York that is the hometown of the artist also known as Biggie. Event founders, Ray Thompson of Divided Right Entertainment and his partner, Alissa Jones Schulters of Bleu Entertainment, hosted an artistic tribute to the rapper who moved the world with his charismatic demeanor and his hypnotic lyrics that tell a story that only B.I.G. can tell. The co-founder of the art show, Thompson has a true passion for the arts. He married the art of Hip-Hop culture with the art of the paintbrush together to celebrate an icon that inspired him since he was a kid.

It would have been a madhouse if they didn’t break down the showings into three (2-hour increments) each day. “We are happy about the turn out despite Covid-19,” states Alissa Jones Schulters, partner for this artistic pop-up experience. Artists from Los Angeles to New York showcased their abstract paintings of the Notorious B.I.G., at this memorable event. The fans were able to enjoy the melodious sounds of @MattViolinist, a featured poet – Smoovebabii, and a “LIVE” art painting by JulesWrld777. This atmosphere was lit with artistry as soon as one hit the door. Nino Brown of Junior Mafia was among the celebrities who showed their support.

Publicist Lynn Hobson admits, “The Notorious B.I.G was a lyrical genius who colored outside the lines. Promoters and the powers that be try to use the name of BIGGIE for their own benefit. However, this event was about the artists who tried to capture the true essence of who this iconic figure was to the world. Although the art that graced this venue was breathtaking, it couldn’t touch the void that was left in the world after his death. This event will give a portion of the proceeds to the Christopher Wallace Foundation – whose purpose is to serve as a vehicle for giving back to the community. ‘As a non-profit organization its primary target will be in the field of education. Where academics are concerned B.I.G. will be acronyms for: ‘Books Instead of Guns’. As this event continues to grow, so will their commitment to give back to the cause as well.”