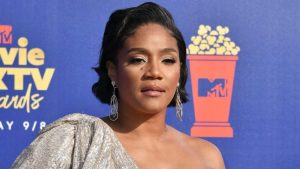 Ellen DeGeneres is on her way out as a talk show host, announcing 2022 would conclude the run of her show. According to Page Six, NBC is eyeing Tiffany Haddish as her replacement.

Tiffany is a favorite, she has humor and empathy in spades,” a senior NBCUniversal said. “She’s top of the list to get a daytime show – she’s a fresh voice.”

When Ellen took a hiatus from the show in October, Haddish stepped in as a guest host.

Speaking with The Hollywood Reporter, Ellen revealed that her instincts led to her tenure ending.

“You may wonder why I’ve decided to end after 19 seasons. The truth is, I always trust my instincts,” she explained. “My instinct told me it’s time. As a comedian, I’ve always understood the importance of…timing. In all seriousness, I truly have felt like next season was the right time to end this amazing chapter.”