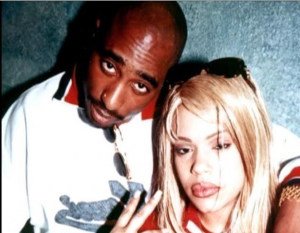 On this date in 1996, 2Pac released the first single from his Don Killuminati: The 7 Day Theory album “Hit ‘Em Up”, aimed at his New York nemesis the Notorious B.I.G., his crew, Junior Mafia and the rest of NYC’s top tier emcees of the era.

Alongside his up and coming crew The Outlawz from New Jersey, Pac went full throttle at the Rotten Apple’s best of the best including Biggie, Lil’ Kim, Mobb Deep and the entire Bad Boy “as a staff, a record label and as a motherfuckin’ crew..” Pac took specific aim at the King Of NY when he boasted, “You claim to be a player, but I fucked your wife…”, which stemmed from the rumor mill which placed Biggie’s wife Faith Evans in a compromising circumstance with her husband’s opps.

Considered one of the best diss tracks of all time, no one from New York responded to Hit ‘Em Up except Mobb Deep, who responded with “Drop A Gem On ‘Em” just months before Tupac Shakur was tragically killed in Las Vegas.

Salue to ‘Pac(RIP), The Outlawz(RIP Khadafi and Fatal Hussein) for making such a pivotal piece of Hip Hop history!