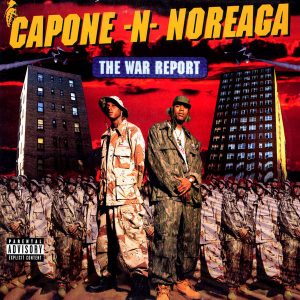 On this day in Hip Hop history, New York rap duo Capone N Noreaga released their first studio LP The War Report. Although Capone was arrested while working on the album, the album was put out seamlessly and stood as a very successful debut.

Considered to be a street classic, the edgy underground sound of this project fits perfectly with the sound of the era. The duo was able to mix their unorthodox delivery with hardcore streetwise metaphors and Five Percenter references to craft a project that would become a household name.

The album peaked at #21 on the Billboard 200 chart and #4 on the Top R&B/Hip Hop charts and featured popular artists Mobb Deep and Busta Rhymes, who both had sounds similar to that of the album. The album’s four singles all claimed spots on the Billboard Top Rap charts making this one of the more successful rap albums of the late 90s.

This album has been credited with reviving East Coast hardcore Hip Hop ending an ear of mafioso rap in New York and ushering in a new era of gangsta rap with artists like DMX, Ja Rule, 50 Cent, and Jadakiss keeping the sounds alive over the next decade.