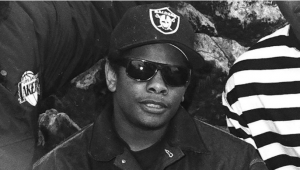 On this date in 1995, Eric “Eazy E” Wright was diagnosed with the deadly AIDS virus and announced the diagnosis via his record label Ruthless Records.

In 1986 Eazy-E went into business with Jerry Heller to create Ruthless Records. It’s often told that Wright used up to $250,000 of his own money –which he made in the streets– to fund this endeavor. Because of this, as Jerry Heller mentioned in his memoir titled, Ruthless, Eazy-E owned 80% of the rights to the company.

Yeah, I was a brother on the streets of Compton doing a lot of things most people look down on but it did pay off. Then we started rapping about real stuff that shook up the LAPD and the FBI. But we got our message across big time, and everyone in America started paying attention to the boys in the hood.

Nine short years after, 1995 to be exact, the world would lose Eric “Eazy-E” Wright to complications from AIDS. Eazy had only been diagnosed with the virus for two weeks when he made it known to the public. Ten days later, the N.W.A. founder succumbed to the disease.

The post Today in Hip-Hop History: Eazy E Diagnosed With AIDS 26 Years Ago appeared first on The Source.