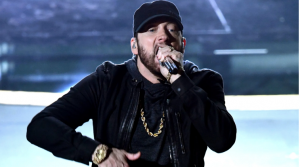 On this date in 2003, Hip Hop icon Eminem becomes the first rapper to win an Academy Award for his monumental “Lose Yourself’ single from the soundtrack of his 2003 8 Mile silver screen debut.

Ironically, Mr. Mathers didn’t even attend the Oscars, therefore he was not present for his win, thinking he didn’t have a “snowball’s chance”.

“Actually, I was sleeping that night. I just felt like I had no chance of winning because, you know, when I heard I was nominated, I thought that was for actors,” said Em about receiving an Oscar.

18 years later, Eminem made it to the Oscars and performed his classic hit, even though it was almost two decades after the fact.

The post Today in Hip-Hop History: Eminem Becomes The First Rapper to Win An Oscar 18 Years Ago appeared first on The Source.