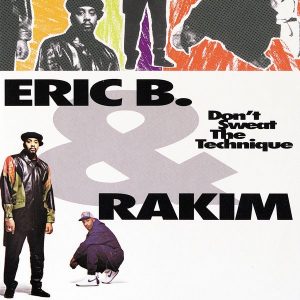 The Microphone Fiend and his silent cohort drop their fourth and final album together on this date.

On this hot summer day in 1992, Rakim, who is widely recognized by some as the greatest MC of all time, released his fourth studio LP with William “Eric B.” Barrier entitled Don’t Sweat The Technique. This was the long-awaited follow-up to Let The Rhythm Hit ‘Em, which was a critically acclaimed album, but that was not reflective in record sales.

This album was also the last LP that Eric B. & Rakim recorded together as a duo. Produced by Eric B. with some production assistance from an up and coming producer by the name of Large Professor, Don’t Sweat The Technique solidified Rakim as THE best lyricist in Hip Hop.

Tracks such as “What’s On Your Mind”, which appeared on the House Party II soundtrack, “Know The Ledge”(theme from Juice), and the title track are eternal lyrical masterpieces that are unparalleled to this day. Even songs like “Casualties Of War” depicting the mentality of a conscious Black male during the era of Operation Desert Storm and the war in Iraq were instructive as well as entertaining, while virtually predicting the 9/11 tragedy almost a decade before it happened.

Salute to Rakim Allah and Eric B. for this classic album!

The post Today in Hip-Hop History: Eric B. and Rakim Released Their Final Album ‘Don’t Sweat The Technique’ 29 Years Ago appeared first on The Source.