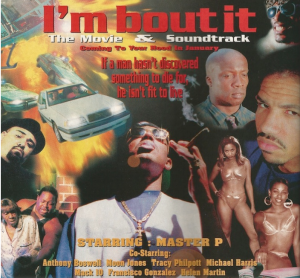 On this day in 1997, Master P, his army of No Limit soldiers and several collaborators released the soundtrack to the hood famous flick I’m Bout It, which was released on the No Limit/Priority imprint.

A cult classic that was mostly copped from the movie man up the block and watched at home, I’m Bout It was a peek into the deadly streets of New Orleans, specifically the B.W Copper section of NOLA, which was known in the 90s and prior as the Calliope Projects. The soundtrack served as a 23-track time capsule, saturated with tracks featuring artists, who at the time, were up and comers such as B-Legit and E-40, 8-Ball and MJG, JT The Bigga Figga, E-A Ski and others. Needless to say the No Limit roster including Silkk the Shocker, C-Murder, Mia X, Mystikal and the Ice Cream Man himself dropped unforgettable hood anthems that earned the soundtrack a platinum plaque within a year of its release. Master P looked for the sophomore success in his second movie and soundtrack combo with I Got The Hook Up, but it didn’t quite reach the plateau of its predecessor.

Salute to Master P, the Miller family, Mystikal, Mia X and the rest of the No Limit family who helped make this soundtrack a part of Hip Hop history! FREE C-MURDER!!!