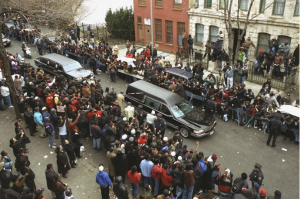 On this day in 1997, the Hip Hop community as well as Bed-Stuy, Brooklyn bid farewell to one of its favorite sons and an unforgettable farewell it was.

Nine days following the shooting death of one of Hip Hop’s most celebrated lyricists, Fulton Street and St. James Place in the heart of Bedford-Stuyvesant, Brooklyn was the site of the legendary celebration of life for Brooklyn’s own Christopher Wallace aka Biggie Smalls. Celebrities such as Mary J. Blige, Lil’ Kim, Ma$e, DJ Premier and others came out to remember the fallen King Of New York, but the most vivid memory was how Bed-Stuy came out to show love for Biggie.

Thousands gathered in the streets of Brooklyn to say one last goodbye to B.I.G…Brooklyn style.

The post Today In Hip Hop History: Notorious B.I.G. Is Laid To Rest, Epic Funeral Procession Held In Hometown Of Bed-Stuy 24 Years Ago appeared first on The Source.