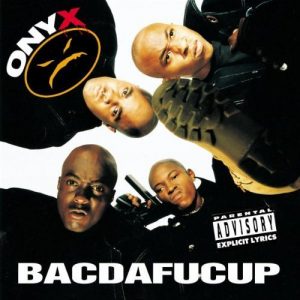 On March 30, 1993, cousins Fredro Starr and Sticky Fingaz along their partners Sonny Seeza and Big DS to put out their debut album, Bacdafucup, on the newly created Rush Associated Labels.

Primarily produced by the group’s founder Jam Master Jay, other production credits include The Afros’ Kool Tee, Chryskillz and a then young producer named Jeff Harris, Bacdafucup was by far Onyx’s best studio LP, becoming certified platinum by the RIAA in just a little over seven months after its debut.

The album’s sure shot singles include the riot-causing “Throw Ya Gunz”, the horn propelled “Shiftee”, and of course the mainstream favorite of all, “Slam”.

Onyx made their claim to fame with their trademark “mad face”, bald heads and all black everything. Many copycats came after these guys, but their mark on the game is definitely unparalleled. Salute to Fredro, Sticky, Seez, and a big RIP to DS.

The post Today in Hip-Hop History: Onyx Dropped Their Debut Album ‘Bacdafucup’ 27 Years Ago appeared first on The Source.