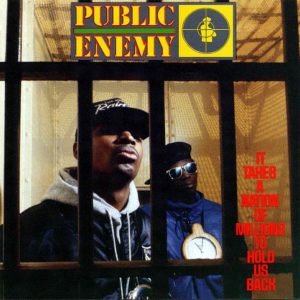 On this date in 1988, Public Enemy released their second LP It Takes A Nation Of Millions To Hold Us Back following up their debut album, which was released just a little over a year earlier.

The album, which was released by Russell Simmons and Rick Rubin’s Def Jam Recordings, was recorded primarily in the legendary Chung King Studios, while other sessions included Greene St. and Sabella Studios in NYC. Production was done exclusively by Hank Shocklee and The Bomb Squad. By August of 1999, the album went platinum and ranks among the top 500 albums of all time, according to Rolling Stone magazine.

Public Enemy, which includes frontman Chuck D., Flavor Flav, Terminator X, Professor Griff, and the S1Ws, were pioneers of the revolutionary rap sound, making songs like “Rebel Without A Pause”, “Black Steel In The Hour Of Chaos”, and “Rebel Without A Pause” prototype tracks for the conscious movement in Hip Hop.

Salute to Chuck D., Flav, Professor Griff, and the rest of the crew for bringing Hip Hop fans this classic that will forever hold a place in the illustrious history of this culture.

Check out the video below that was in heavy rotation during the album’s apex. It even features a special guest appearance from MC Lyte as an investigative reporter. Check it out!

The post Today In Hip Hop History: Public Enemy’s ‘It Takes A Nation Of Millions To Hold Us Back’ Turns 33 Years Old! appeared first on The Source.