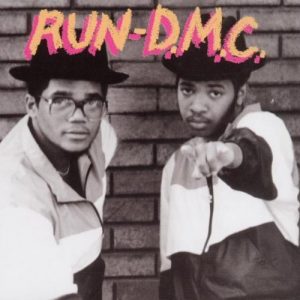 On this date in 1984, the Kings from Queens released their first self titled album on Def Jam Recordings under Rush Management.

This monumental album put Daryl McDaniels (DMC), Joseph Simmons (DJ Run) and Jason Mizell (Jam Master Jay) on the map, and launched one of the most successful careers Hip-Hop has ever seen.

With songs like “Sucker MCs,” “It’s Like That,” “Hard Times” and “Rock Box,” the record was an accurate reflection of the lives of three ambitious kids from Hollis, Queens in New York City in a time before the crack epidemic.

Simmons and McDaniels used to hang around Two-Fifths Park in Hollis in late 1980, hoping to rap for the local DJs who performed and competed there. The most popular one just happened to be Mizell, then known as “Jazzy Jase” because of his flashy wardrobe and b-boy attitude. Eventually, Simmons and McDaniels rapped in front of Mizell at the park, and the rest is history.

As a group, they soon strapped on a pair of Adidas, threw on a rope chain and topped it off with a Kangol hat. Little did they know, they were crafting a signature style, one that has stood the test of time and is widely recognized around the world.

Run-D.M.C. went on to release six more albums, including 1985’s King of Rock and 1986’s Raising Hell. Tragically, Mizell was gunned down on October 30, 2002, at his recording studio in Queens. Countless fans left Adidas sneakers, albums and flowers for the legendary DJ outside of the studio, where the murder occurred. The homicide has yet to be solved.

Run-D.M.C. was also inducted into the Rock and Roll Hall of Fame in 2009, making them one of only two Hip Hop acts given that honor at the time.

The post Today in Hip-Hop History: Run-D.M.C. Dropped Their Self Titled Debut Album 37 Years Ago appeared first on The Source.