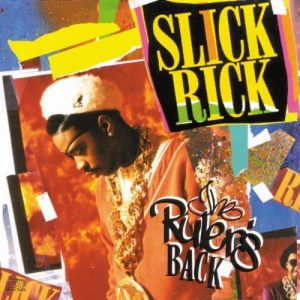 Slick Rick was and still is one of the greatest storytellers in hip-hop history. After the promotion and success of his first album, The Adventures of Slick Rick, the British MC continued his ascent to stardom with his sophomore effort The Ruler’s Back.

Slick Rick’s second album was finished rather quickly due to the fact he was hit with a five year stint behind bars. The first hit single off the album was “I Shouldn’t Have Done It”, reaching number two on the Billboard Hot Rap Charts.

Following “I Shouldn’t Have Done It,” Slick Rick released the singles “Mistakes of a Woman in Love With Other Men” and “It’s A Boy.” The project also features production from Mr. Lee and Slick Rick himself. Russell Simmons served as executive producer.

Listen to The Ruler’s Back on Spotify.