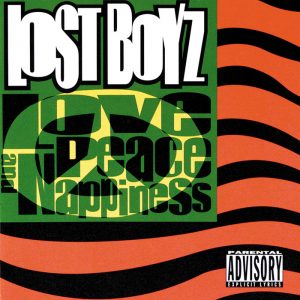 On this day in Hip Hop history the famed Queens Hip Hop quartet The Lost Boyz dropped their sophomore album, Love, Peace And Nappiness over two decades ago. As successful as the reception of their debut album Legal Drug Money, their second album still managed to garner the gold album status, selling over 500K units.

With production from the likes of Easy Mo Bee, Bink Dawg and the legendary DJ Ron G, who produced the album’s lead single “Me And My Crazy World”, this LP was a sleeper album that came out just months after the second shooting death of a rapper(Biggie Smalls) following the overly publicized East Coast vs. West Coast beef. Guest appearances by the likes of Redman, Canibus and A+ adds to the lyrical diversity on this album.

Salute to Mr. Cheeks, Pretty Lou, DJ Spigg Nice and RIP to Freaky Tah to everyone who had a hand in making this album a piece of Hip Hop History!

The post Today In Hip Hop History: The Lost Boyz Release Their Second LP ‘Love, Peace And Nappiness’ 24 Years Ago appeared first on The Source.