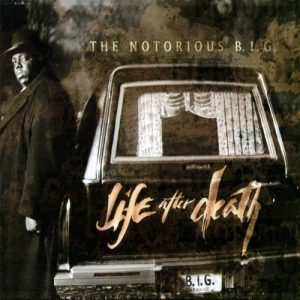 This day in Hip-Hop history, Notorious B.I.G. released his second album, Life After Death. The double LP was released posthumously by Bad Boy Records. Biggie, who was killed two weeks prior to its release, was nominated for three Grammy’s for this project: Best Rap Album, Best Rap Solo Performance for “Hypnotize” and Best Rap Performance by a Duo or Group for “Mo Money Mo Problems.”

Featuring artists like 112, Jay-Z, Lil’ Kim, Ma$e, Bone Thugs-n-Harmony, Too $hort and R. Kelly, along with tracks like “Kick In The Door,” “What’s Beef,” “Notorious Thugs,” “Ten Crack Commandments” and “Sky’s The Limit,” it can be said that Life After Death is one of the greatest rap albums of all time. The album hit #1 on the Billboard 200 chart and the US Top R&B/Hip Hop chart. It went diamond (that’s 10,000,000 copies sold) in the United States alone, double platinum in Canada, and platinum in the UK. Life After Death has also made appearances on top music charts across the globe. The album has been ranked by countless publications as one of the top rap and Hip-Hop albums of all time (The Source ranked it as #8 in 2005).

Salute to Diddy and the rest of the Bad Bot family for this timeless piece of Hip Hop history!

The post Today in Hip-Hop History: The Notorious B.I.G. Dropped His Posthumous ‘Life After Death’ LP 24 Years Ago appeared first on The Source.