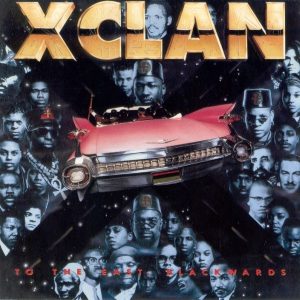 On this day in 1990, “The Verbalizer” Brother J, Professor X “The Overseer”, Paradise “The Architect” and DJ Sugar Shaft “The Rhythm Provider” collectively known as X-Clan, released their debut LP To The East, Blackwards on 4th And B’Way/Island Records.

Produced by the entire crew that was put together by Paradise, who at the time ran the NYC Hip Hop hotspot Latin Quarters nightclub, this album helped to pioneer a movement of Black empowerment in Hip Hop culture with an infusion of Parliament/Funkadelic that was attractive to the youth of that era. Their “Blackwatch” organization, which was led by Professor X’s father, Brooklyn activist Sonny “Abubadika” Carson, legitimized their involvement in raising the consciousness of the Hip Hop generation and their 11 track, debut project was one of the tools that they used to attract their cult-like followers.

Tracks such as “Funkin’ Lesson” and “Heed The Word Of The Brother” led to the album’s mainstream visibility, however, other songs like “A Day Of Outrage(Operation Snatchback)”, “Verbs Of Power” and “In The Ways Of The Scales” allow Brother J to instruct the listeners about the socio-political issues of people of African descent around the world, but primarily in the United States.

Salute to the original members of X-Clan as well as those who continue to carry the legacy of the Clan. Thanks for this timeless piece of Hip Hop history!

The post Today In Hip Hop History: X-Clan Dropped Their Debut Album ‘To The East, Blackwards’ 31 Years Ago appeared first on The Source.