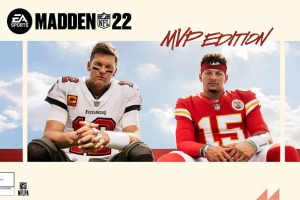 What’s better than one goat, how about two of them? Both Tom Brady and Patrick Mahomes have landed on the cover of “Madden 22,” which will be released on Aug. 20. EA Sports released the cover and a hype video for the game on Thursday.

Both Brady and Mahomes have separately made the Madden cover in recent years. Madden hasn’t seen two athletes split the precious real estate that is the cover of the game since Madden NFL 10, when Cardinals receiver Larry Fitzgerald and Steelers safety Troy Polamalu appeared on the front, posing as if they were about to collide.

This year’s cover pairing is interesting considering Brady and the Tampa Bay Buccaneers beat Mahomes and the Kansas City Chiefs in Super Bowl LV four months ago. Nevertheless, both are goats in the game and Mahomes’ legacy is just getting started.

The post Tom Brady And Patrick Mahomes to Share ‘Madden 22’ Cover Together appeared first on The Source.