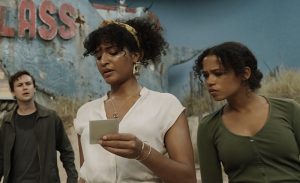 Indya Moore (Pose) is taking the lead in Escape Room: Tournament of Champions, the sequel to the 2019 thriller franchise Escape Room. The hot new trailer features Moore and the return of Taylor Russell, fighting for survival in a crazed sadistic killer’s deadly game of elaborate puzzles. In the new film, surviving Escape Room hero Zoey (Russell), wants to ensure that the perpetrator behind the deadly game is finally put in jail. But it isn’t too long during a fateful subway ride, she and some other passengers, including Moore’s Brianna character, realize that they are trapped in another game.

Escape Room: Tournament of Champions is a Columbia Pictures film and directed by Adam Robitel, written by Will Honley and Maria Melnik, Daniel Tuch and Oren Uziel with a story by Christine Lavaf and Fritz Böhm.

According to the official description:

Escape Room: Tournament of Champions is the sequel to the box office hit psychological thriller that terrified audiences around the world. In this installment, six people unwittingly find themselves locked in another series of escape rooms, slowly uncovering what they have in common to survive…and discovering they’ve all played the game before.

Check out the trailer: